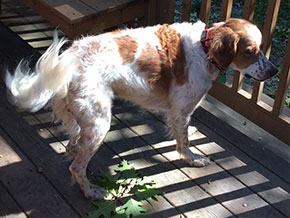 Meet Allegro. We call him “Leggy.” He is part of a long tradition of office dogs here at Marsh & Wagner. He is a very special dog. Allegro was born in Oklahoma on May 11, 2011, one of 5 pups born to a backyard breeder. The pups were taken into rescue about 5 months later, and placed in quarantine in Texas to ensure their health while they were caught up on their vaccinations.
At nine months old, Pam Marsh and her husband adopted Leggy through Above and Beyond English Setter Rescue. A few weeks later, after showing signs of increasing pain, he was diagnosed with both a luxating right patella and severe hip dysplasia in both legs. In March 2012, Leggy had his first operation: a double pelvic osteotomy [DPO] on his right side. In the summer of 2012, he had a total hip replacement on his left side. He is now a happy, healthy dog. Despite it all, this bionic dog is upbeat, playful, gentle, affectionate and a real snuggler.